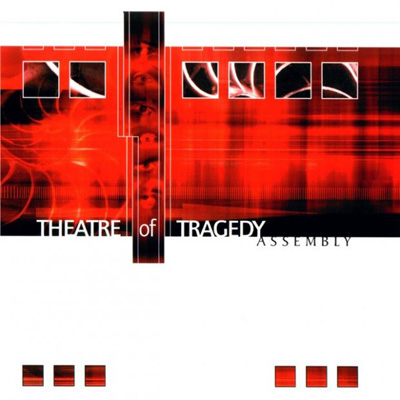 Our first Album Adventure, based on Assembly by Theatre of Tragedy, a gothic metal/electronic band from Norway. Assembly was released in 2002 by Nuclear Blast.

In the Ninth World people are going missing and there rumours flying about something whispered only as The Assembly, a group or gathering, perhaps cultists, fanatics or something else, that when revealed, could spell serious consequences for the Ninth World.

Getting the Players Involved

The players may have heard rumours about The Assembly and seek to investigate. As way of making them more invested, perhaps a friend, family member or someone else they know has gone missing and the only clues they have are that perhaps this ‘Assembly’ is involved.

Alternately, the players may simply stumble upon some strange events and decide to get involved, clues and hooks might include:

In the City of Yenth, people have been leaving, never to return. Many put it down to the portal to New Yenth and there is much dark talk about the ultra-terrestrials from New Yenth infiltrating their fair city for dark and nefarious ends. Amidst the growing discord in the city, there is a growing trade in entertainment, anything to relieve the general malaise that is beginning to consume the city as it turns upon itself out of fear and desperation. Pleasure has become a lucrative commodity, far more than usual and is in high-demand. People just want to lose themselves in something for a few hours, a brief respite from the oppressive sense that something terrible is going to happen, be it a witch-hunt for ultra-terrestrials, an assault against the portal or another discovery that yet more people have disappeared.

When the players arrive in town (or if they are natives, they already know) it is clear that Yenth is a city on the edge. People are leaving in droves and thievery is rife, abandoned homes being looted almost in plain-sight of local guards and militia who are too over-worked by the need to keep order and put an end to the disappearances to deal with all of them.

The players may be inclined to leave immediately, but if that happens a group of merchants looking to protect their stores will offer to hire the players as guards and escorts. The merchants refuse to be driven out of their homes and businesses by fear, and as proud citizens of Yenth, would rather die fighting rather than see their city fall to ruin.

The militia could also do with help and while they have little to offer with their resources stretched so thin, they can offer a number of cyphers and oddities from New Yenth, that given the current climate most Yenthians don’t want to be associated with.

If the players go with the merchants, during their duties they will hear several rumours and whispers about the companions and about something called the Assembly, but when they try to discover more, they find little more than half-truths, guesses, fear and doubt with little concrete information about anything. The only thing they learn is that a small group of companions have banded together for mutual protection and they have grudge against another companion called Tzenbroen, who they claim since coming to town has stolen or driven away their customers.

One of the merchants that have hired them also goes to be with Tzenbroen. The merchant never returns and the other will encourage the players to investigate, refusing to pay them any further until their missing comrade is found.

If the players go with the militia, they are asked to deal with petty rumours, tips and information the militia has received regarding the companion known as Tzenbroen. Several witnesses claim that Tzenbroen has been bewitching his clients and sending them off, never to be seen again. The players are expected to report back with what they discover and if necessary, deal with the problem.

Tzenbroen is an olive-skinned, androgynous hermaphrodite who provides pleasure to all who are willing to pay for it.

While typically he identifies as male, he tailors his mannerisms and appearance to the preferences of his clients, passing quite easily as either female or male. As a companion, Tzenbroen is most often hired for sexual pleasure, especially in these times. However, Tzenbroen offers all sorts of services, social and physical, but always maintains that they are done in private. Tzenbroen never agrees to do anything outside of his own dwellings, and visitors are only allowed in with a prior appointment.


Motive
Profit and pleasure
Health
15
Damage
5 points
Movement
Long
Modifications
All social interactions as level 5, all tasks related to sex as level 6, tasks involving running and acrobatics as level 5.
Armour
2
Combat
Despite his demure attitude and appearance, when forced into combat, Tzenbroen fights like a demon, lashing out with expertly coordinated fists and feet in a flurry of blows too fast to follow. His attacks feel like being hit with solid bars of metal, hitting with a strength far more than his appearance would indicate.
Interactions
Tzenbroen is always polite and demure, but accepts no nonsense or violence. He expresses regret at causing others jealousy, but feels no guilt but isn't willing to share any information about his clientèle, even if they have disappeared. He does express genuine concern about them and their well-being, but doesn't want to get involved in what is clearly a matter for the authorities.

If threatened, Tzenbroen casually dismisses them, but if violence seems likely, he flees, using his agility and speed to outmanoeuvre his attackers until he can escape.

If propositioned, Tzenbroen is happy to oblige and asks his new client to make an appointment. He only ever deals with individuals, never groups. Payment is always upfront.

During a liaison with Tzenbroen, the client will eventually find themselves staring into his eyes. If they then fail a level 1 mental defence roll (smart people are rarely affected), lights from Tzenbroen's eyes program their mind with a compulsion to seek out the Assembly and directions on how to find it. Tzenbroen isn't even aware this happens, as he also enters a trance whilst programming his victim.
Loot
In Tzenbroen's dwellings, a search can reveal 200 shins and several oddities used for sex, massage and other activities. Hidden under the bed is a diary detailing strange dreams about the Assembly and hopes that this new city will see an end to the recent trend of client leaving town after a liaison.

If Tzenbroen is killed and examined, it becomes clear Tzenbroen is an automaton and he can be dismantled yielding 1d6 cyphers.

An investigation into Tzenbroen reveals a number of interesting facts and rumours. He never sleeps and never seems tired or exhausted after any activity he undertakes. He is strong and fast, far more than his gentle frame would suggest and one thief claims that he once stabbed Tzenbroen, but the knife just slid off of him, like a flint off steel. Many rumours about him are of his prowess in providing pleasure and many believe that those that employ his services leave the city simply because they know they can’t cope being near him and not partaking of his services again and again until they are bankrupted.

Other companions are quick to accuse him of causing the disappearances, of deliberately inciting rebellion and fear in the city to profit off of the vulnerable and will slander him mercilessly if given an ear to talk to. It is clear that there is some severe professional jealousy afoot, and more than a few slighted companions that bear a grudge after Tzenbroen refused to tutor them in his techniques.

If confronted, Tzenbroen is happy to have a civil conversation, but refuses to divulge any client information or allow an inspection of his dwellings. If challenged as being an automaton, Tzenbroen will laugh, thinking the idea ludicrous and truly Tzenbroen isn’t even aware he isn’t human.

If the players gain entry to Tzenbroen dwelling, either as clients or by other means, they can easily discover the items within from the loot section of the panel above. They may also notice there is no food storage or preparation areas.

The house has two floors, the lower one is mostly empty, filled with old, empty storage boxes from a previous owner. The crates are mostly stacked haphazardly and players investigating must beat a level 4 careful movement task to avoid causing several towers or piles to collapse, causing a noise that will alert anyone within short range. The upper floor is mostly taken up by a luxurious bed, several expensive and high-quality silk drapes and various shelves of interesting and erotic oddities. Light is dimly provided at all hours by a single major glowglobe suspended near the centre of the ceiling.

If the players have snuck into the dwelling, unless they have made plans to keep Tzenbroen distracted, he soon returns whilst they are investigating as he is often very quickly employed, making a confrontation very likely. If a player is a client, they eventually will be confronted with Tzenbroen’s eyes (see Interaction in the above panel) or will need to explain themselves if they are investigating, as Tzenbroen makes a point of observing his clients closely.

If Tzenbroen is confronted and his true nature revealed, Tzenbroen will be shocked at the revelation that he is an automaton beneath his skin. He will offer to assist the players however he can, but his is severely shaken by the knowledge. He will also begin volunteering information about the disappearances and that he believe that he might unknowingly be responsible, as his clients almost always leave and never return after their liaisons.

Through trial and error, the players with Tzenbroen’s help can figure out that his eyes do something strange to the human brain when it is in a state of heightened arousal or relaxation. With some convincing, Tzenbroen will allow the players to examine his eyes so they can learn the message it programs safely.

Finally, Tzenbroen begs the players not to reveal his secret. All he ever wanted to do was provide pleasure to those that need it. If his eye-programming can be permanently deactivated (a level 4 difficulty intellect task) he will plead to be allowed to continue his work, if not, he will even offer to give the players his eyes if they will spare him and keep his secret.

#### What if Tzenbroen doesn't become involved? If the players never discover anything about Tzenbroen, there are plenty of ways they might still follow the trail and learn more about the Assembly. They might see people travelling, trance-like, out of the city, or hear rumour to that effect about the behaviour of the missing people.

Eventually the players learn that the disappearing people are all headed to Dynafel, a city over the border in Iscobal and home to the Dreaming Reliquary, a place where Aeon Priests keep - and continue to research - remnants of the prior queen’s obsession with dreams.